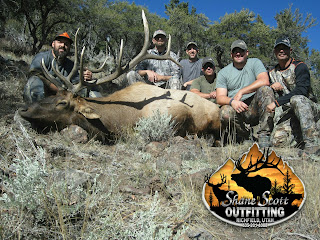 Shane,
I loved hunting with your team, please feel free to use my pics and info for referrals.
It took 13 years to finally draw my Utah LE Bull ELK tag. Being a NON-RES meant that I had to make a choice. I could drive 5 hours each way for multiple weekends to try and scout a somewhat familiar unit, or hire an outfitter.
Once the decision was made to hire somebody, I had to pick what group I trusted more than a decade of my time and money to. The choice to use SSO was the best decision I have ever made. (don’t tell my wife I said that.)
Shane was super easy to get a hold of and answer all my many questions. He would call me and text me pics of what bulls were being seen in the area. I shoot a lot, and was specific in wanting a long range type shot. (1,186 yards)
My guide was Matt Rhineheart. He is a total Stud. I knew I could shoot, I needed someone to find animals. Matt can find and see animals from another state! He was patient with me and yet pushed me when needed. I couldn’t have done it without him. Hunting without SSO would of left me HIKING and I wanted to be HUNTING!!!
Also, I chose to have 2 scouts with us, Shaun Robbins and Cody Barton. Careful you don’t get stuck with a nickname with these two. (LOL) These guys quartered and carried that bull off of the top of that mountain like a couple mules. THANK YOU SSO!!!
Steve Albright, Nevada
Posted by Unknown at 12:46 PM No comments: 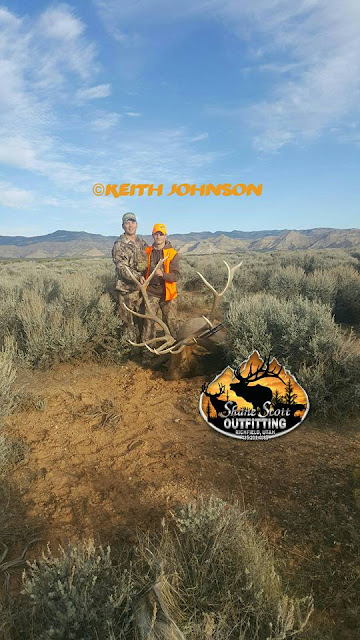 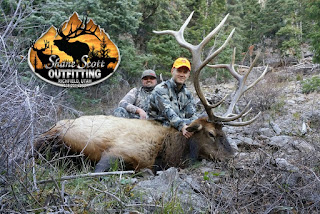 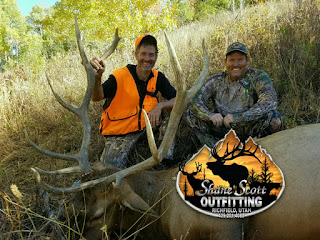 Shane,
Thanks for hooking us up with all the right resources for us to enjoy a successful elk hunt.
The unique combination of skills/assets that Austin, Don, Robbie, and Corey corporately added to the package proved to be enjoyable and effective.
Austin did a great job as host while he was there and the accommodations he provided where top notch.
Robbie was very aggressive and energetic, pushing 125% toward the goal of getting everyone on a bull. He filled in the gaps in camp wherever they appeared and covered more bases than just his own.
Corey was a little more laid back and unrefined but gave 100%. He brought his friend Roy along who really proved to be a huge asset. Corey's dad, Bill, also contributed a lot of useful information about the area. They made a great team.
Don had an approach that I was a little uncomfortable with at first [me being a whitetail hunter]. It didn't seem like he had an intimate knowledge of the area like Corey and Robbie and hadn't been very successful finding a big bull with his scouting. So we mainly stayed on the roads the first 2 days, glassing, listening and getting familiar with the area. As the hunt went on I slowly warmed up to his spot and stalk philosophy on elk hunting.
Bill had introduced us to a spot on the second day that Don and I returned to on the third morning. We spotted a bull that looked worth pursuing but he was moving fast toward some dark timber for the daylight hours. I got him in my scope as Don ranged him at 501 yards. It was a hard quartering away shot and I wasn't as steady as I needed to be so I passed on the shot. We ran up the road to get a better vantage but he slipped into the pines and disappeared before we could set up.
This was the point where Don impressed me as a determined guide. We trimmed a few saplings and he got me set up inside a burned out stump to use as a shooting bench. Then he went across the canyon, got on the back side of the bedded elk and began to put light pressure on them in hopes that the bull would back out the same way he entered the timber. It turned out that there were other elk bedded in there too. Some went one way, some another, but a bull did come out right where we hoped. When he ran back out on the hillside that I was watching, I panicked and forgot all about assessing him or ranging before the shot. I guessed the distance at 600 yards, fired 3 times and missed. Then to my amazement, Don stopped the fleeing bull, turned him around with cow calls and lured him into a small opening high on the ridge.
By this time I was getting my emotions under control and got my head back in the game. I laid the empty gun down, grabbed my pack and fished out the rangefinder, ranged the bull at 492 yards, put a single shell in, anchored against the stump, put the 500 yard circle on his vitals, pulled the trigger, and put a hole through both lungs. It ran down hill a little and stopped behind a bush. I ranged again and found the distance to be 445, I opened the bolt, pulled a round out of my belt container and slide it into the chamber.
Through the scope, on 20 power I could see his head, neck and the front edge of his shoulder. His head was hanging low and my impression was that he was hit, but I wasn't sure. I centered his neck between the 400 and 500 yard circles in my Nikon Monarch BDC reticles and slowly squeezed the trigger until the explosion surprised me.  The 338 Win Mag 225 grain Barnes bullet busted his neck and dropped him.  My first Elk!
He ended up being a 5x6, not as good as I wished for but plenty good enough to leave me satisfied with no regrets. He may or may not have been the bull we had seen earlier, but I'm ok either way.
Back to my commentary on Don. Whatever doubts I had about Don were discarded when he crossed the canyon and manipulated my bull into a killing position. He really went above and beyond to help me close the deal on that bull. He's pretty cunning with people too. He cut himself with the knife a little while skinning and acted like it was real bad so I would pack out some of the meat and the bulls head for him. I love to learn little tricks like that from guides, I may try it sometime myself:).
Another great thing about Don was the quality of his equipment. From his glasses, to his camper, to his ATV's, it was all first class stuff, he cuts no corners on equipment. But his biggest asset is that he is just fun to be with, he made each outing enjoyable and showed me a lot of beautiful country. Sometimes he even acted like he was out of breath just to make me feel good about not being in tip top shape myself :), a nice touch! I forgive him for cussing at me once, I deserved it - I'll let him tell you that story.😉
Both Jon and Rick have expressed multiple times that they were also greatly pleased with with their guides and the entire package.
I believe any one of us would be good additions to your reference list.
Mark Miller, South Carolina
#sso #shanescottoutfitting #teamsso #utah #bullelk #wapiti
Posted by Unknown at 4:10 PM No comments: 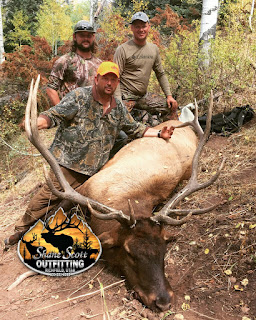 Shane,
I would like to thank you and your team of guides for making my elk hunt such a success for me and my sons. I knew I was going to inconvenience you with the request to bring my two adult sons along but Team SSO Guide Robbie Anderson made everyone feel very comfortable.
We could not have been happier with Robbie Anderson as our guide. He was a complete professional. It helped a lot that he had a good sense of humor too.
I would be glad to be used as a referral in the future. Seldom does a trip deliver everything we hoped it would. This trip was exceptional. Thanks for making everything come together for us.
Best wishes,
Jon Peery, South Carolina
#sso #shanescottoutfitting #utah #teamsso #wapiti #bullelk
Posted by Unknown at 3:57 PM No comments:

I really can’t say enough about Guide Wes Sanders effort in this hunt. He gave it everything he had up to the very last minute of legal shooting time and to the very end.
Wes hunted hard and kept us moving. The opportunities for a shot on this hunt proved to be difficult but Wes stayed optimistic and kept pushing. His knowledge of the area was excellent. Had just a couple of things gone right (none of which was Wes responsibility) that week we would have had an elk. The effort was impressive. What we experienced, the miles that we hiked, the wildlife that we did see, the communication, and the hospitality was as good as it gets.
From my very first call to Shane every detail was handled and responded to quickly. SSO’s flexibility to give us what we were looking for was appreciated. When it passed to Wes, nothing changed.
You get out of a hunt what you put into it and I never found any doors that SSO wouldn’t go through. Yes I would recommend without reservation Team SSO and Guide Wes Sanders.
David Wilder, California

Posted by Unknown at 3:41 PM No comments: 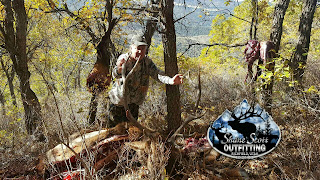 Hi Shane,
Thanks for a great hunt. Your guides were the best. We hunted hard for 5 days and had opportunity to take elk in the 300-350 class, 4 or 5 times a day.
Not only did we get chances, we got close. I was hunting with a traditional muzzle loader so that was important.
As this is probably my last chance to get a really large bull 380 up, I held off, go big or go home. This hunt took 18 years to draw. In 18 more years I will be 82. It's hard enough on me now, if I live to be 82 I think an elk hunt is probably a bad idea.
Your guides were very good at keeping me areas that were not to steep and deep.  So I ended going home empty. The next day you called and informed me that I had paid for a 7 day hunt and I thought I had only 5 days.
I rescheduled 2 more days at the end of the hunt.
When I returned the elk had been pushed hard by the deer hunters. It was very difficult to find them. With a little hard work my guide and I finally located some bulls.  We began to work in on the biggest one.  It became a race through the oak brush. I finally got my shot and the hunt was over.
It wasn't the elk I had dreamed of, but a nice 6 point.  I couldn't be happier with the ability of your guides. They are the best and I have all around the world with many outfitters. Thanks again for giving me a great hunt. I got more than my money’s worth.
I would highly recommend you to anyone looking for the best.
Thanks again,

Rod Larkin, Utah
Posted by Unknown at 3:34 PM No comments: